You are here: Home › Our History

History of our school

The records of this school take us back to 1914 when a new school was built on the site of what is now known as College Court. This new school replaced a school which was built by George and Sophie Evans in 1876. The new school had 4 classrooms- two for the girls and two for the boys. With an increase in pupil numbers in the late 1950’s pressure on space resulted in the provision of a new three classroom school for the girls on the present site in 1959. The boys stayed in the original school.

In 1974 under the principalship of Mrs Maguire the school was extended to provide an all-purpose room and two classrooms- all of which are still in use as classrooms today. In 1987/88 the new boys school was built to the rear of the girls’ school. A further extension provided us with three additional classrooms, a new staff room, an office, store rooms, toilets and a shared school hall. 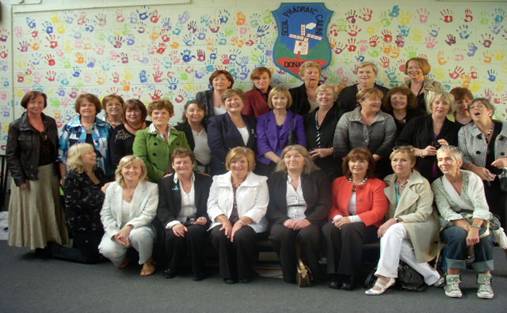 Where we are now

In September 2000 following an extension to the boys’ school building the girls’ school acquired a further four classrooms, a new staffroom, a number of smaller rooms to be used as resources/learning support rooms and a library. This brought the total number of classrooms to twelve. In October 2005 due to an increase in numbers we received a prefab housing two classrooms. This was followed by another prefab classroom in September 2007 and a further one in September 2008.  Since then our hall has been extended by taking in the existing library and a new library was built by our caretaker Michael Smith. In 2015 we got our four new permanent classrooms to replace the prefabs. Our school is now nearly full with over 440 pupils.

Donabate is an area steeped in history. On our doorstep we have a huge amount of buildings from different historical eras. To begin with the name Donabate in Irish is Domhnach Beathach which means the church of the living. Two other possible meanings of Donabate are “Church of the Beast” or “Fort of the Ferry”. Sadly the true meaning has been lost over time

In 1912 Donabate had only 734 residents and 150 houses. It remained a small quiet village for almost a century. However in recent years the areas easy access to Dublin city made the population grow very quickly. In 1996 the overall population was 1,868. By the 2002 census the population had doubled to 3,854 and in 2016 it had a population of 7,443. 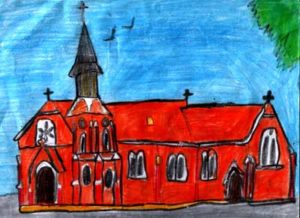 In 1903 Donabate got a new church just 50 yards from the 1802 church. This was built under the leadership of Fr Magill as Parish Priest. When they decided to build a new church Archbishop Walsh came to Donabate himself to inspect the plans. Previously Fr Magill believed that there was not enough wealth in Donabate to build a new church. It was estimated that it would cost £5,000 to build. They had about £900 already raised. Portrane hospital could raise £2,000. Fr Magill had organised for the site to be donated by the Barnewall family. A collection list was also opened and £1,000 was donated by Archbishop Walsh. John Smyth (who wanted the church visible from the train station so people on the train could admire it) and William Smith both raised £100 each. The impressive, imposing building has been listed by Fingal County Council for preservation. The present church accomadates 310 seated. The centenary of the church was celebrated in 2003. 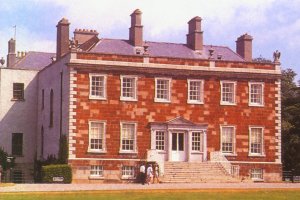 Newbridge House was built in 1736 by Archbishop Cobbe and remained in the Cobbe family until recently when it was acquired by Dublin County Council (now Fingal County Council) in 1985. The Cobbe family still reside there on a part time basis and have very kindly agreed to leave the furniture and fittings in the house. Up to some years ago it was believed that the name Newbridge House originated with the Cobbe family, however the discovery of a survey in the Belfast Public Records office shows the existence of the name Newbridge House in 1705 which was 30 years before Bishop Cobbe made his initial purchase of lands in Donabate.

Newbridge House has over 30 rooms all filled with antiques and marvelous furniture. It is a great attraction for tourists and a very fine example of a Georgian mansion. There is also a huge garden which was built in the 18th century as well as a working farm with a large number of animals and machinery. The grounds also house an excellent children’s adventure playground and is well worth a visit for a family day out.

The parish hall started its life as a Catholic Church which was built on land donated by the Barnewall family. The parish priest Luke Teeling initiated the building of the church. It was built in 1804 and at that time it was a plain building with no porches like it has today. The parish hall was used as a church for almost 100 years until 1903 when the new church was built. The ‘old church’ then became the Parish Hall.

The Parish Hall was a valuable part of the community and had many uses such as sales of work and dances. A very important meeting was held there in 1918- an anti-conscription meeting held by the clergy who did not agree with the English enforcing conscription of Irish men into the army.

Today the Parish Hall which is over 200 years old is still used for meetings, sales of work, girl guides and other clubs. It is a very important part of the community. The Senior Citizens of Portrane and Donabate hold their club there three mornings a week where they meet up with their friends.

Don't miss a thing! Join us on social media

Scoil Phadraic Cailini is an all girls primary school located in the parish of Donabate in North County Dublin. We are a Catholic school under the patronage of the Archbishop of Dublin... Read more »